This document describes the operation and configuration of an eBGP design for the exchange of EVPN routes in a VXLAN overlay network, in conjunction with MLAG.A single eBGP session can be configured to advertise both the underlay routes (loopback IPs) and the overlay EVPN routes, however, to provide operational separation between the overlay and underlay network, this documents discussion an eBGP over eBGP design, where separate eBGP sessions are created for the underlay and overlay advertisements.  The configuration and guidance within the document unless specifically noted are based on the platforms and EOS releases noted in the table below.

VXLAN provides the ability to decouple and abstract the logical topology, by using MAC in IP encapsulation, from the physical underlay network. The logical topologies created by the encapsulation, often referred to as the ‘Overlay Network’, enable the construction of multi-tenant layer 2 and layer 3 environments over a single shared physical infrastructure.Within the context of a data center deployment, the physical IP infrastructure or underlay network is typically constructed from a fully redundant layer 3 leaf spine architecture utilising eBGP for propagation of the underlay routes and ECMP for traffic load-balancing as illustrated on the figure below.

In the eBGP underlay design, the leaf switches within each rack are deployed within the same AS (65001) , the spine switches are configured within a single AS (65000). To provide fast failover and avoid the need to modify any BGP timers, the BGP sessions are configured on the physical interface of both the leaf and spine switches. BFD can be configured on each BGP session, however given the session is running on the physical link, failure of the link will result in a sub-second failure of the eBGP session and it’s associated routes being withdrawn, BFD therefore will only add an overhead to the design without providing any significant value.

Figure 2: eBGP sessions running on the physical interface of the network nodes

Running the eBGP sessions on the physical interface, directly connecting the leaf and spine nodes, also removes the need for an IGP in the underlay for the advertisement of any loopback address.  In the four spine topology, illustrated in figure 2 above, each leaf switch will have four eBGP peerings, one to each of the  spine switches.

To provide resiliency within the rack, the leaf switches are deployed in an MLAG configuration. Arista’s Multi-Chassis LAG (MLAG) technology provides the ability to build a loop free active-active layer 2 topology. The technology operates by allowing two physical Arista switches to appear as a single logical switch (MLAG domain), third-party switches, servers or neighbouring Arista switches connect to the logical switch via a standard port-channel (static, passive or active) with the physical links of the port-channel split across the two switches of the MLAG domain. With this configuration, all links and switches within the topology are active and forwarding traffic, with no loops within the topology the configuration of spanning-tree becomes optional. 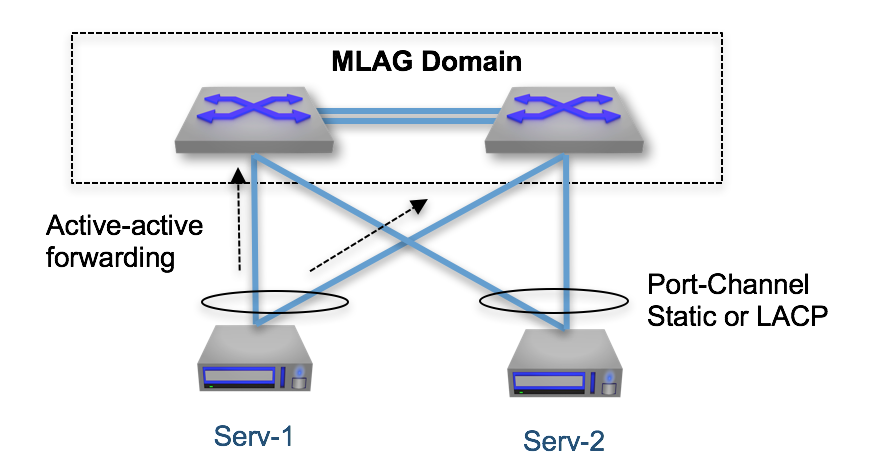 From a layer 3 perspective the two switches of the MLAG domain, act as independent layer 3 routers. Therefore each switch, will run it’s own separate eBGP peering to each of the Spine switches. To ensure failover even in the event of a leaf switch losing all four links to the Spine, an iBGP session is also run across the peer-link of the MLAG, providing a backup path to the Spine. 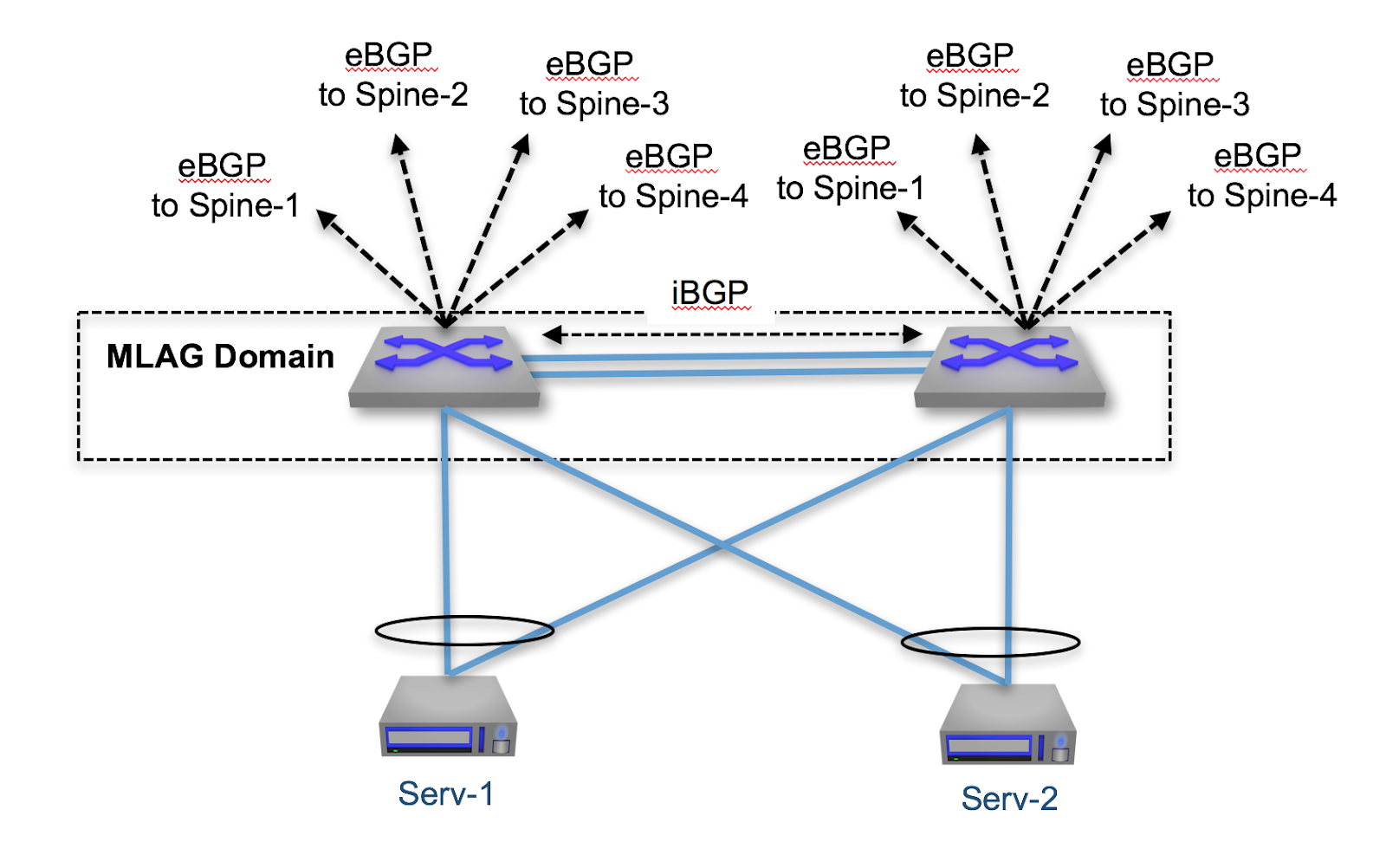 To provide resiliency and active-active forwarding in the VXLAN overlay network, the switches within the MLAG domain act as a single logical VTEP sharing a loopback IP address, which would be the source IP for any VXLAN encapsulated traffic. 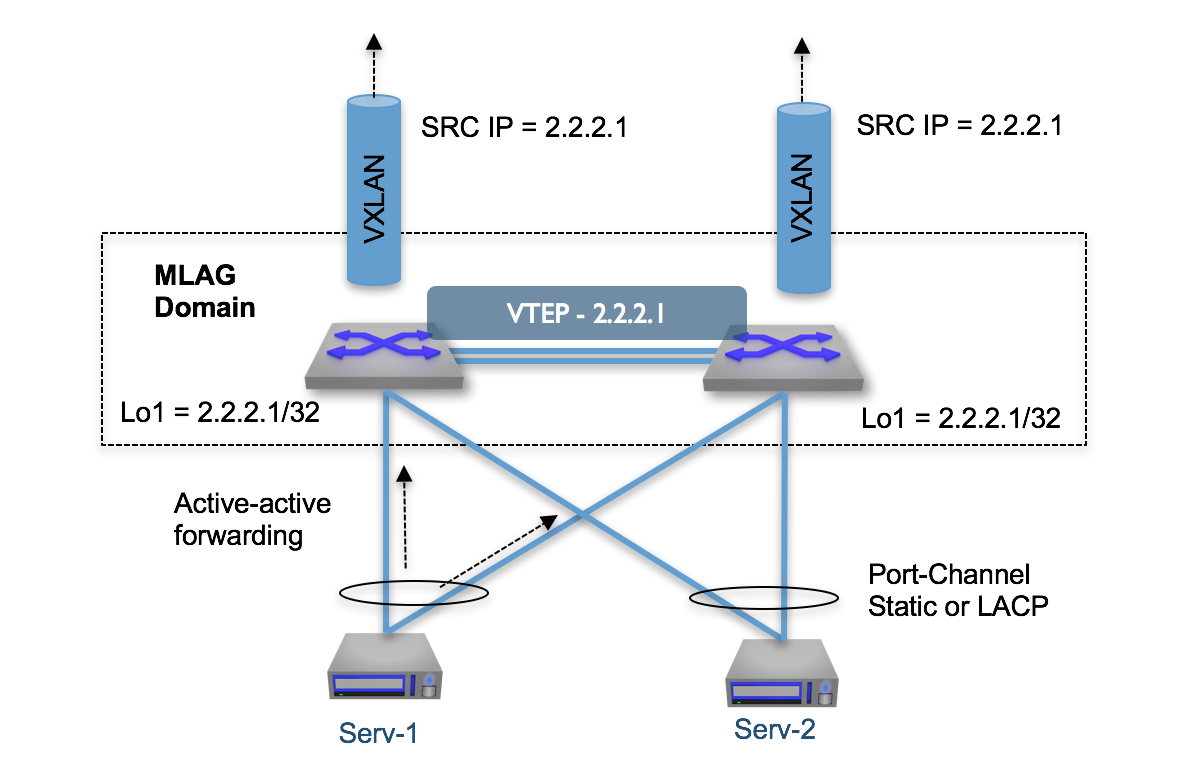 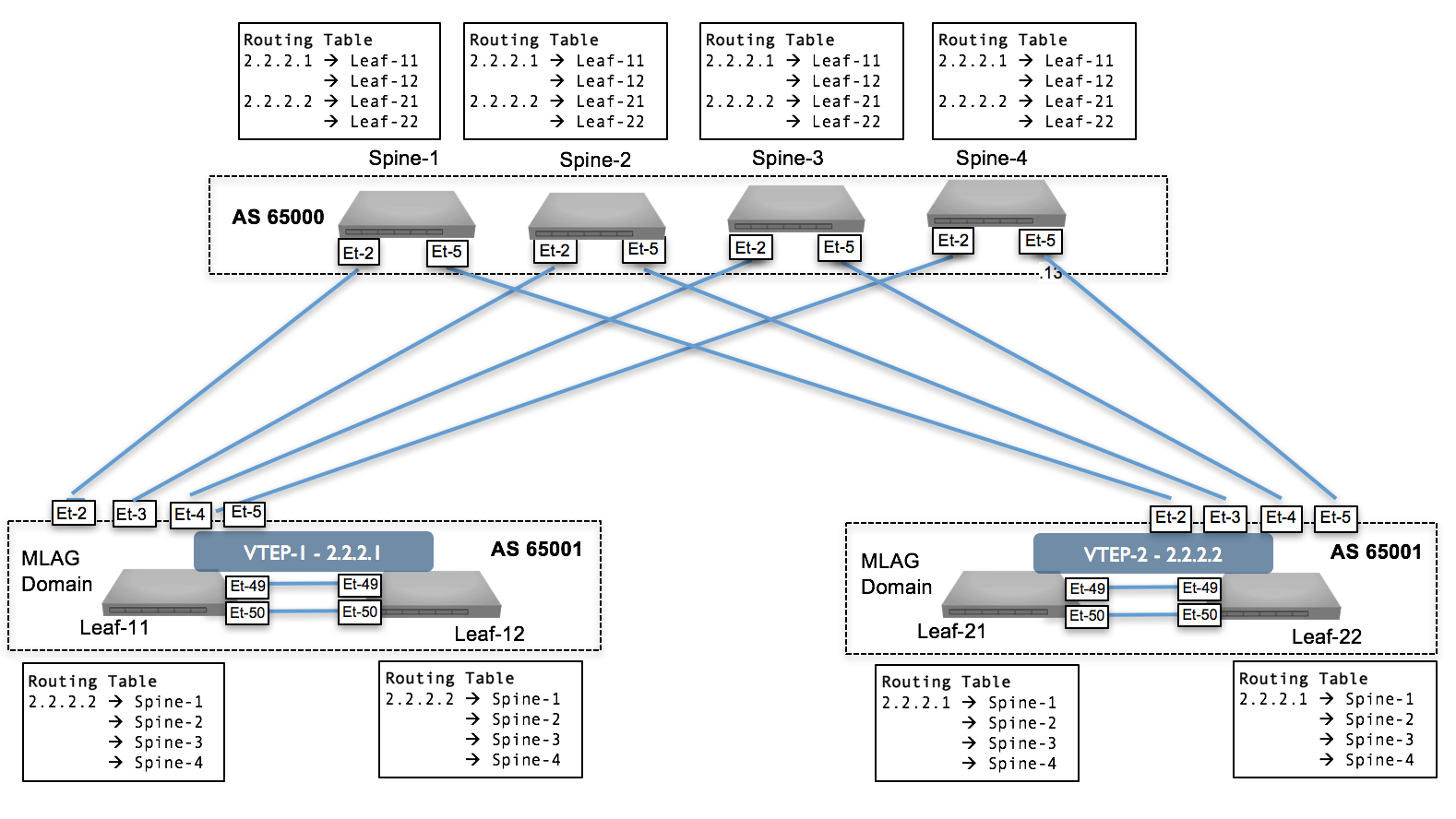 The ECMP model, load-balances traffic across all links and nodes in the network based on a hash of the 5-tuples of the routed packet, the resultant hash deciding which particular link the packet is forwarded on. This provides an active-active forwarding model, where all links and nodes in the topology are active and forwarding traffic. The classic hashing model can however cause disruption to all flows when a link/node in the network fails, as all flows in the network need to be re-hashed to the remain links rather than just the flows affected by the failed link. To avoid this level of disruption, the Arista switches support resilient ECMP, where only the flows affected by the failed link are re-hashed to a new link, all other flows are unaffected by the failure, and continue to be hashed on the same link as before the failure.

With both MLAG peers announcing the shared IP address of the logical VTEP, in the event of a switch failure within the MLAG domain, there will be zero disruption to the forwarding plane. A switch failure in the MLAG domain will result in it’s physical links to the Spine being brought down along with the BGP session and any corresponding routes learnt via the session removed, including the logical VTEP IP. 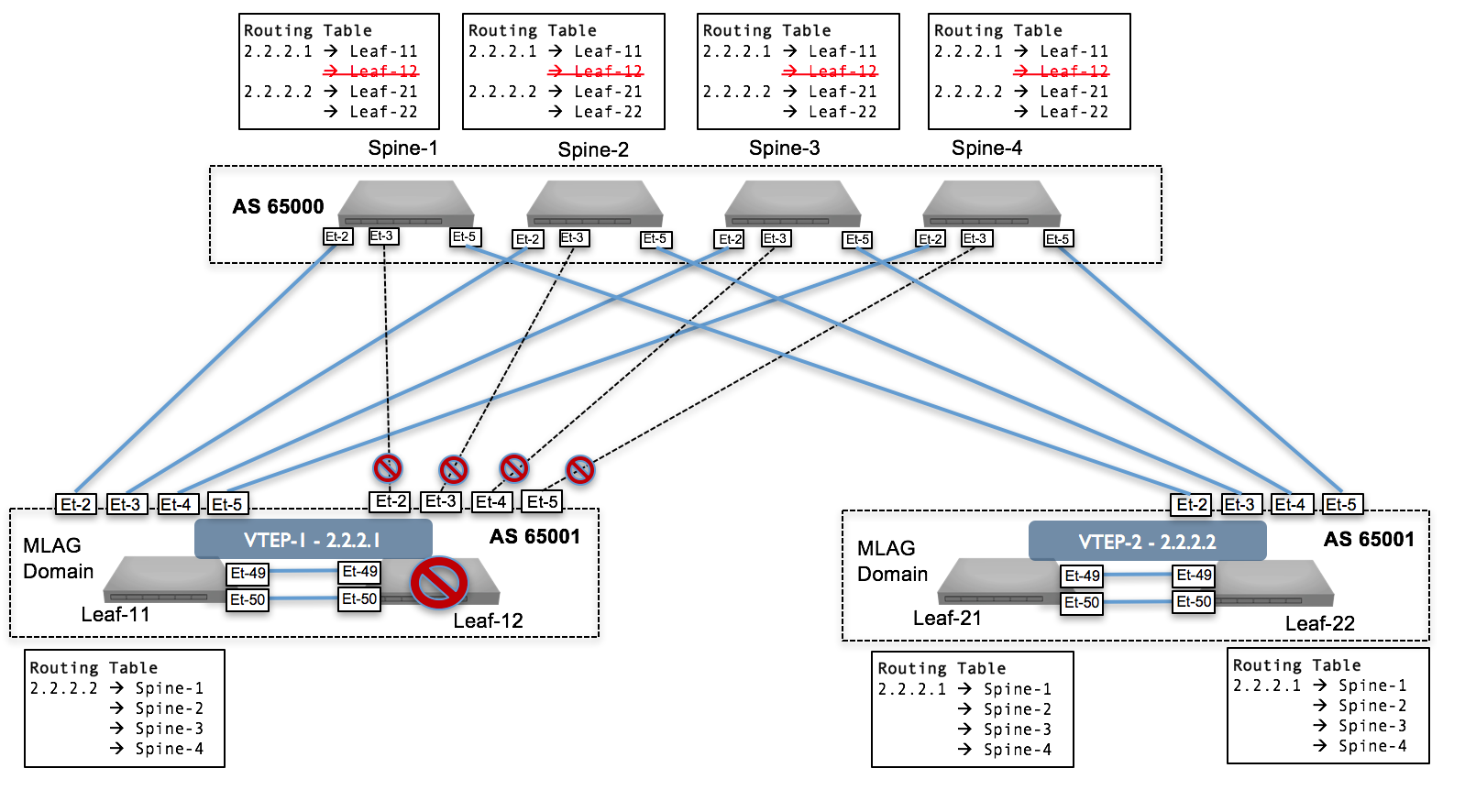 Remote VTEPs however will still learn the shared IP address via the remaining MLAG peer, and continue to send traffic to the same logical IP address, which would be load-balanced across the four ECMP routes learnt via the Spine, due to the MLAG peer failure each Spine switch will now have a single route to the logical IP, via the remaining leaf in MLAG domain.

The figure below, outlines a typical layer 3 leaf-spine topology, with a 4 switch Spine and two racks, with a pair of leaf switches deployed in each rack in an MLAG configuration. To provide the connectivity into the overlay network, each MLAG domain is configured as a logical VTEP (VTEP-1 and VTEP-2), each with a shared loopback IP. The following configuration, outlines the network underlay configuration; eBGP, MLAG and VTEP etc for the leaf  switches in rack-1 and the eBGP underlay configuration for two Spine switches; Spine-1 and 2.

The leaf switches are configured with a standard MLAG configuration, where a port-channel  1000 (Ethernet 49 and 50) is created  on both switches for the MLAG peer link, and interface Vlan 4094 is configured on the port-channel for the MLAG peering session across the port-channel. A second interface VLAN 4093  is created on the peer-link, which will be used for the iBGP session between the two switches. To ensure both VLANs (4094 and 4093) are not automatically create on any other trunk link of the switch, unless specifically configured, both VLANs are defined within their own trunk group  (MLAG_PEER and LEAF_PEER_L3)

To create a logical VTEP for the MLAG domain, a shared loopback IP address (2.2.2.1)  is configured on both switches and the VXLAN interface is created with the shared loopback as the source IP for the VTEP interface. No overlay networks are created on the VXLAN interface at this point. A separate unique loopback IP address (lo0) is created on both switches, for the router-id and will be used as loopback for sourcing overlay EVPN eBGP session.

Both leaf switches in the MLAG domain, have four uplinks, one to each of the Spine switches. A point-to-point routed interface is created on each of the uplinks and eBGP neighbour for connecting to each Spine is defined and separate iBGP session is created across the MLAG peer link. To simplify the BGP configuration separate peer-groups are created for the Spine and the MLAG peer. . To provide IP connectivity to both the shared and dedicated loopbacks, a route-map is created announcing the loopback IP addresses into the underlay.

With the 4 eBGP sessions and the iBGP session up, below is the resultant routing table for Leaf-11. With ECMP enabled on the leaf switches, Leaf-11 is now learning four paths to the physical loopback of leaf-21 and leaf-22 (via each of the Spine switches) and four paths to the share loopback (2.2.2.2/32) for the logical VTEP-2 of rack-2. The leaf switch is also learning the physical loopback of each of the Spine switches, which will be used for eBGP EVPN session for the overlay network in the section of the document.

With the logical VTEP IP addresses announced in the underlay and learnt by each of the leaf switches, along with the physical loopback IPs of each switch (Leaf and Spine), the overlay eBGP EVPN session are created on the physical loopbacks between the leaf and spine nodes. This overlay multi-hop eBGP EVPN design, is highlighted in the diagram below.

To provide resiliency, the leaf nodes have separate eBGP EVPN sessions with each of the four Spine switches. This ensures consistent configuration and behavior on the Spine, regardless of which Spine  fails or placed in maintenance, the remaining Spine switches will provide the same functionality.

The eVPN session could be run on the physical interface connecting to the Spine, in a similar manner to the underlay, however to maintain operational separation between the overlay and underlay networks, the EVPN eBGP session is run  on the loopback IP’s. To simplify the configuration a peer-group (SPINE_EVPN) is created for the four Spine neighbours, as the session is run on the loopback IP of both switches, multi-hop eBGP is used. The EVPN routes (Type-2 and Type-5) use a number of BGP extended communities, advertisement of extended communities therefore needs to be allowed on the peer-group.

To avoid the need for full eBGP mesh between all the leaf nodes in the design, the Spine switches act as a EVPN transit nodes. Where the Spine will peer with each EVPN leaf node and re-advertise the EVPN routes, with the next-hop unchanged (originating VTEP IP remains) and any  extended community  re-advertised. The configuration of Spine-1 and Spine-2, to allow EVPN transit behavior is shown below:

With the Spine and leaf EVPN sessions configured, each leaf switch will have four BGP EVPN sessions, one to each Spine as illustrated below: